While studying the early days of Essex County, I have run into the work of Sidney Perley quite a bit. Recently, I found his Essex Antiquarian on-line at the Peabody Institute Library. Sidney published from 1897 to 1908. At that time, The Massachusetts Magazine started and published quarterly for a decade; it was the second attempt (from Salem), as there was one (from Boston) right after the American Revolution.

While looking at Vol. VIII (1904) of the Essex Antiquarian, I found this map which mentioned a Henry Lunt receiving land in Salem from Francis Skerry (see page 158). Looking at the Lunt book, this is Henry the son of John who was the son of Henry and Ann (see #20 on page 8). 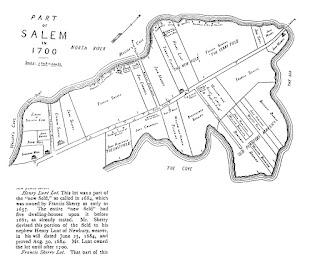 We will be looking further into details of the Essex County experience. For this lot, here is a modern blog post about Massey's cove. Sidney considered that this is where Conant and his crew came into Naumkeag after leaving the Gloucester (Cape Ann) area.

05/23/2019 -- It was following up on this information that we saw a problem on a findagrave record that needed attention.  Then, we spent about four days looking at the Blakes; now, it's time to write a post. Go to WikiTree (John Blake and find profiles of some of his children and a biography in progress). Alpheus had a sister Caroline whose husband became a veteran of the Civil War. We have linked his grave record to the record of his wife (which points to WikiTree as the focus for continuing work).