We are doing a History of Harvard using the Presidents as a focus through time as they map well to American (U.S.) history.

Abbot is a descendant of Henry Lunt and was President.

There will be more this year.

Posted by AJSwtlk at 9:05 AM No comments:

In our last post, we mentioned two descendants of Henry and Ann Lunt. One was Calvin Coolidge; the other was Thomas W. Markle who is the father Meghan. The few posts in this blog ought not be taken as lack of activity which will pick up this year, for several reasons.

As an aside, the 400th of Plymouth was muted last year due to COVID's entry on the scene. The planning for the other anniversaries continues quietly. We would like to suggest a little change. If one looks at Massachusetts, starting in the 1620s, towns came into existence continually. This post on the 400ths lists over 70 towns. Notice the image. See Wikipedia for the page on the settlements.

As an aside, rather than just look at the 400 roll-over, we are taking a broader view: 400th, 300th, 250th, 200th, and 100th. That is, we are talking four centuries of families. Notice that this blog has a link to the Lunt book (which needs some serious updating). We have found lots of other Lunt work being done and will get to pulling the information together.

The 250th? That's what SAR/DAR are calling the upcoming event which has been organized from the perspective of the U.S. (link to the 250th project - america250.org). Lots has been written about the American Revolution. There are plenty websites targeted to the subject. Note that both SAR (newly minted) and DAR have extensive databases about Patriots and their families.

We are also looking at Loyalists, especially from the perspective that New France and New Spain subsumed much more land than did New England. The 200th? At that time, the border twixt Canada and the U.S. was still fluid. People were moving out west about this time, as well. So, lots to look at.

But, stepping back. Benedict Arnold led a group from New England up to Quebec in 1775 to stage a surprise attack. Some of the volunteers were from Newbury and Newburyport. We start by looking at one who did a diary - Caleb Haskell. What is interesting is that Caleb was at the  Siege of Boston in the organization of Ezra Lunt (Lunt book, #302). Ezra did not go north with Benedict's group.

But, the tale is interesting. Too, the Lunt book makes some mention of Ezra's life. There is more on his service in the Mass Sailors & Soldiers book. However, we can fill in the pieces, too. For example, in our other blog, we are looking at The Massachusetts Magazine which published from 1908 to 1918. Each issue included a look at a Regiment that had been at the Siege of Boston. Ezra is mentioned on TMM, Vol IX, 1916, page 33; his brother, Paul, is listed a little later.

In brief, Arnold's trek had lots of problems. It was winter. He was wounded. So, later events might be seen, somewhat, in a new light.

We have been posting information since 2010 and are ready to formalize the scope and look. Any recommendations and comments would be welcome.

Posted by AJSwtlk at 2:09 PM No comments:

There are lots of families to look at. We have found dozens through working with friends on their pedigree in the context of organizations in the Hereditary Society Community. These families represent the gamut: New England entry moving early to Virginia (and the Carolinas) then west; Virginia (and Carolinas) entry moving post the Revolution to the west (following Boone, sometimes) - these went north west leaving tracks across the plains to the coast or went south to Texas and points west (of these, some went further - with Oregon a popular destination); New England out west by water (two modes) establishing themselves on the coast; those from New France out west via the northern waters; and many more. Must mention later entry along the mid-coast that were a first wave since one had to go inland to find land. Also, for a period, there was an influx from Europe post the Civil War (early entrants in this group were here in time to support the Revolution. Lots of groups and times.

George Shultz, who served in the Marines and was a member of the Cabinet for several Presidents, died recently at the age of 100. He was born in 1920. Looking at his life's work, several things popped up. But, taking a further look at one topic led to this short list which will be extended. George has a mixture of new and old families. However, one of his activities was being a Fellow at the Hoover Institute. This is hosted at Stanford University. Herbert Hoover, 31st President, was a descendant of New England, too. As usual, as we look at pedigrees, we look to find a 'cousin' relationship, whether by genes or by in-law-ness. In many cases, this allows us some additional material for research.

But, what was interesting with respect to Hoover was who he followed; so, the 30th President is our first name. The second name is contemporary and placed as a marker for future research.

In both of these trees, we find the profile of Henry Lunt. Work will continue with respect to the information provided and its provenance.

Posted by AJSwtlk at 6:13 PM No comments:

We have seen lots of references to Henry and his time. We will pay more attention to these.

So, with the proverbial punt down the road, we'll let the year end.

This theme on one family complements the TGS work; we'll get getting back to this.

For now, here are pointers to current work is being done:

This year, we got involved with getting Find A Grave records updated.

Posted by AJSwtlk at 3:36 PM No comments:

In the spirit of the Holiday that dates to the Civil War, recent work suggests future activity. While looking for details about property owned by a Henry Lunt in Salem, MA (Sidney Perley's map), we got back to a collateral family. There is records on findagrave for this family. One record had been changed, so that caused more research (Problem with Find A Grave). Per usual, there was a lot more information on this family than a few years ago (Resources and work).

Given our experience with WikiTree last year (Margaret, anew), we started a profile for John Blake (Pittsfield, NH) as the central figure. Too, we were interested in Elizabeth A. (Blake) Lunt but went looking for siblings and other members. Sure enough. There was enough found to now write this up further. Still, there's lots to do.

Turns out that Elizabeth has an older sister, Caroline, who was the first child. So, we found her birth notice and followed the family through Census and other records. We saw that Caroline had married Walter A. Ingalls. We saw that she was in Boston before marrying with her brother, Alpheus P. Blake. That unusual name helped us identify other siblings.

But, the gist of this post is Caroline's husband. There is a grave in the Riverside Cemetery of Saugus that says: Walter A. Ingalls, Co. A, 24th Reg. Mass. Vols. Earlier, we had seen notice that Caroline had received a pension. The record of her husband said that he had served in Co. A. Reg 24. So, is this he? Well, on further search, he is unique name helps resolve the issue. 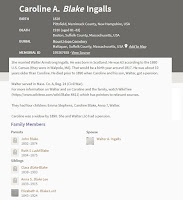 Caroline was noted as a widow in 1890. So, Walter died before that. We will be working more on the details. Their son was noted in the Congressional Record (1921) as being eligible for a pension after his mother died.

Along with other family records, we made a records for Caroline as she had several children. So, more work to do. Also, we know that Walter was born in Scotland. He was about 10 years older than Caroline. They lived in several places in Massachusetts. So, we now have a pointer on findagrave on the Walter record that points to a record that we manage and can keep up to date as we research. The Caroline record on findagrave points to her WikiTree Profile.

This was our first time associating a grave record with the family that was left behind. That this involves a person who was a Civil War veteran makes it more significant given that this weekend is the scheduled holiday weekend in the U.S. As we looked at the Blakes, we noted Patriots from the Revolutionary War time, plus 1812 conflict references. Hence, we will make an effort to identify those associations as we find them and make sure that grave records get updated as necessary.

In findagrave, one asks the manager to make a change that may or may not get done. Right now, John's and Ruth's records point to the four daughters. We have the other updates suggested and pending.

06/02/2019 -- We are working this in conjunction with the Thomas Gardner Society, Inc. This case has lots of opportunity to show necessary work and to discuss methods, even technology.

Posted by AJSwtlk at 2:10 PM No comments: